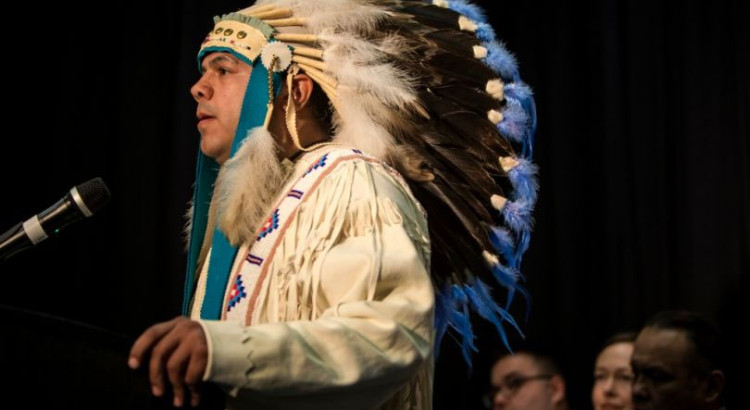 A Heartfelt Message from JoDe Goudy, Tribal Chairman of the YAKAMA NATION

Observing the world from a Yakama Nation perspective, based on well documented historical information, it cannot be denied that many times during the fifteenth century the Holy See issued documents of war to be used against non-Christian nations and peoples of the globe. Those documents were collected in 1917 in a book entitled European Treaties Bearing on the History of the United States and Its Dependencies to 1648 (ed., Francis Gardner Davenport, Carnegie Institution). By those documents, various popes promulgated and unleashed a conceptual and behavioral pattern of domination and dehumanization that has not yet been ended or disestablished. To this day that pattern is still being used against our Yakama Nation and against other Original Nations and Peoples, typically called “Indigenous.”
A prototypal example is the papal edict Dum Diversas, of 1452. By that document, Pope Nicholas V authorized King Alfonso V of Portugal to “invade, capture, vanquish, and subdue, all Saracens, pagans, and other enemies of Christ,” “to reduce their persons to perpetual slavery,” and “to take away all their possessions and property.” Such language ought to be seen for what it is: a crime against all those nations and peoples. Numerous other documents demonstrate the same pattern, such as the papal edicts of 1493. A key example is the language in the papal bull of May 3, 1493, which contains the following: “…sub actuali dominio temporali aliquorum dominorum Christianorum constitute non sint…” referring to lands not under the actual temporal domination of any Christian dominator. The document calls for our nations to be “reduced” (“deprimantur”} for the “propagation of the Christian empire” (“christiani imperii propagationem”).
Given the above examples, I question: Does Pope Francis, as the Vicar of Christ, and as the representative of the Holy See, intend to revoke the series of papal edicts that are, no doubt, among the most humanly destructive edicts in the history of mankind? These edicts promulgated the Doctrine of Christian Discovery and Domination (“dominorum Christianorum”) that has been used against our Yakama Nation and against other Original Nations of this continent and this hemisphere. Will the Church, guided by the leadership of Pope Francis, candidly acknowledge, as an act of truth-telling, that those documents contributed mightily to the death and destruction of Indigenous (Original) nations and peoples?
In my view, instead of giving sainthood to Junipero Serra, which places an imprimatur of sanctity on the deadly colonizing legacy of the papal bulls of the fifteenth century, Pope Francis ought to do the right thing by revoking the destructive edicts issued by his predecessors. By doing so, he will thereby will be assisting in the work we are engaged in to disestablish the Doctrine of Christian Discovery and Domination. He will relinquish the enabling documents that have allowed, and continue to allow nations to justify their individual acts of destruction upon the Indigenous (Original) nations and peoples throughout the globe. Pope Francis could do so with the explanation that Jesus Christ would never have issued those edicts in the first place, given their disrespect for, and effort to destroy and strip us of, our original free existence. Thank You.